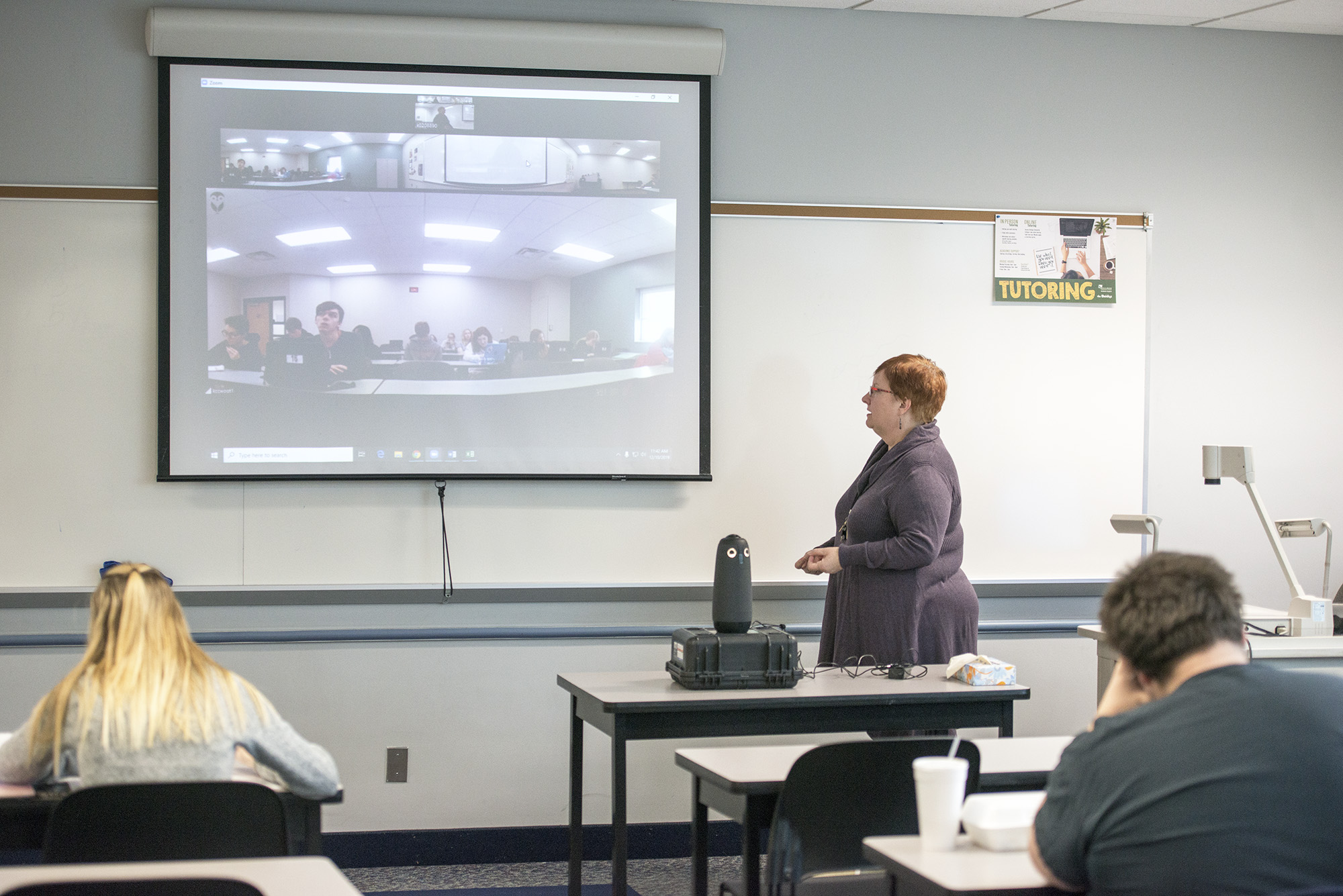 Kellogg Community College this fall is piloting a new video conferencing technology in the classroom that allows students at the College’s regional centers in Albion, Coldwater and Hastings to take courses only offered on campus in Battle Creek (and vice versa).

KCC began using 360-degree “Meeting Owl” cameras with Zoom video conferencing software in a history course this semester taught by professor Michelle Wright. The technology provides panoramic views of the classroom to attendees in multiple locations and facilitates interaction by using voice detection to focus the Owl camera on individual speakers as they talk. Instructors and students are shown on a split screen in each class location.

Wright splits her time teaching the course in classrooms on KCC campuses in Battle Creek and Albion, with students from the one campus attending via the video conferencing technology on the days Wright is physically teaching at the other. She said the new technology could open doors for students who may not have reliable transportation or time to travel certain distances to go to class.

Distance learning at the college level – including at KCC – is nothing new, and Wright has taught online classes for more than a decade. But the interactive nature of the Owl technology takes the learning to a level closer to that of a more traditional classroom environment.

“It’s not me just delivering material and the students just receiving it,” Wright said. “We’re actually conducting a dialogue, and the learning and discussions will be more meaningful as a result of that.”

The purchase of the Owl cameras was funded through a Program Initiative Grant from the KCC Foundation submitted this summer by KCC Director of Learning Technologies Tammy Douglas. The cost was just under $3,200 for four cameras, enough to connect the College’s North Avenue campus in Battle Creek to the Eastern Academic Center campus in Albion, the Grahl Center campus in Coldwater and the Fehsenfeld Center in Hastings.

Licenses for the Zoom software, totaling $80, were purchased separately with Instructional Division funds through a collaborative Michigan Colleges Online partnership that allows member colleges access to such technologies at a significantly reduced cost.

Douglas said the goal of the project is to improve the student experience by giving them consistent access to courses required for their programs at more convenient locations, or “to create a synchronous distributed learning environment to support teaching and learning throughout KCC’s multiple campus locations.”

The dialogue is important for students who would otherwise be unable to take a course that wasn’t offered at the campus closest to their home or work, Douglas said, and the devices let KCC instructors more effectively engage their distance-learning students.

“They don’t have to interact with the camera one by one,” Douglas said. “They can just talk and the camera will pan over and look at them.”

Students enrolled in the pilot program were asked if they wanted to participate. Future students will be able to determine which courses utilize the video conferencing technology via specific designations in the registration system.

Wright said her students quickly became accustomed to the Owl cameras, which are about a foot tall and actually resemble their namesake, with LED “eyes” that glow on the front of each device.

“The students have been really responsive toward the technology,” Wright said.

Wright will continue the pilot with another history course next semester, which begins in January, and expand it to other classes if the format proves successful.