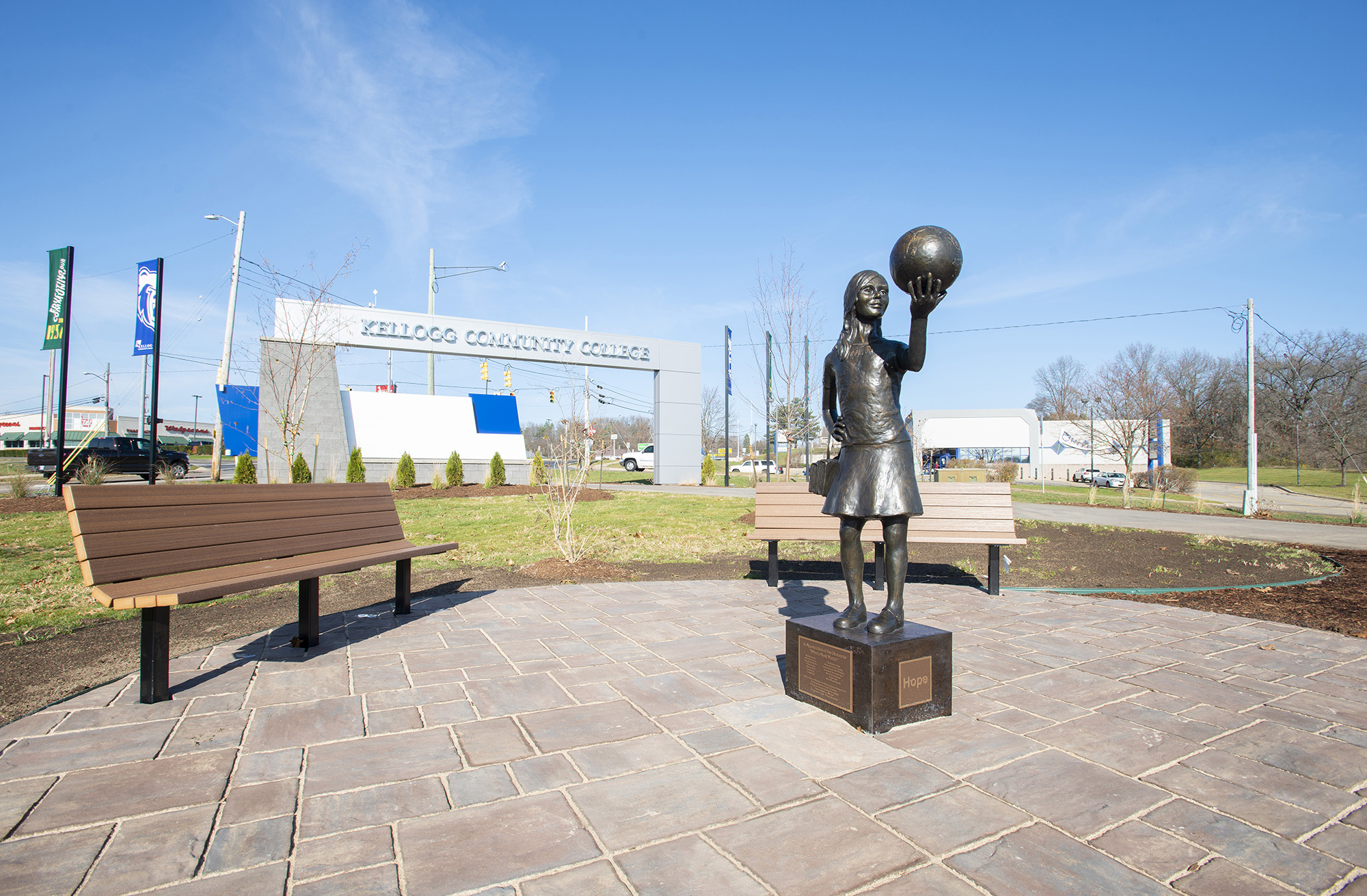 Hope has come to Battle Creek, and she’s got the whole world at her fingertips.

That’s the message of the latest sculptural addition to the permanent art collection at Kellogg Community College, unveiled during a ceremony Nov. 9 on campus. The 4.5-foot bronze sculpture – stationed at the corner of North and Roosevelt avenues – is titled “What’s Next World?” and features a young girl named Hope standing on a podium, holding the planet Earth in an outstretched palm while looking over campus.

The sculpture was created by 1965 Harper Creek High School graduate Paula Blincoe – who started her college education at KCC – and was gifted to the College by the Battle Creek branch of the American Association of University Women. The group began raising funds for the project in celebration of its 100th anniversary starting in 2017, creating the AAUW Battle Creek Centennial Legacy Community Project Fund through the Battle Creek Community Foundation.

KCC President Dr. Adrien Bennings at the unveiling ceremony congratulated the AAUWBC on 100 years of service in Battle Creek and said the College is “proud to be the home of Hope.”

“When you think of art, art brings life, it invokes something in the campus, in the community, and it stirs something within,” Dr. Bennings said. “As an affiliate college of AAUW, we are honored that the local chapter chose KCC to display this meaningful sculpture that will be a constant reminder not only of AAUW’s mission but our shared vision that all paths are possible, and the need for thought and education to accomplish that dream.”

Sculptural details include “AAUW” embossed on the sculpture’s dress, a star on the globe indicating the location of Battle Creek, and books held in Hope’s other hand, including books on subjects like rocketry and science.

Kay Calley-Martin, co-chair of the AAUW sculpture project committee, said the book selection is meant to show that anything is possible.

“That’s what we would like to see: Challenging women and young women to challenge things and go beyond in the quest of what they want to be,” Calley-Martin said. “Just because it’s not normally a career that a woman or a young lady would choose, let that be your goal, let that be your challenge.”

In an artist’s statement, sculptor Blincoe said the sculpture was intentionally designed to embody the AAUW mission of advancing equity for women and girls.

“I was thinking about the hope and strength the community of members have given to so many young women to think outside the box,” Blincoe said. “The group has given so many the means and opportunity to explore all the possibilities outside of traditions. … All paths are possible and need to have thought and education to accomplish the journey.”

Blincoe said she hopes the sculpture will serve as a reminder that “there is more to be accomplished for women.”

“My hope is that park visitors will reach up and touch the ‘world’ for luck and inspiration, or perhaps take a moment to examine how their actions will impact the world,” she said.

“What’s Next World?” is the latest addition to the College’s continuing North End Gateway project, which has been in development since 2017. In addition to the sculptural pad area, the project includes a paved pedestrian path, a large “Welcome to Battle Creek” monument sign, a bike rental station and new landscaping including trees and native plants. The intent of the project was to create a welcoming, inviting space for people to gather, walk or ride on campus, located near the College’s tennis courts and connected to the city’s Linear Park pathway system.

The sculpture joins a growing permanent art collection at KCC curated by the KCC Foundation’s Art on Campus Initiative, the mission of which is to provide art experiences on campus for students, faculty, staff and the community. In addition to curating the College’s permanent art collection, the Art on Campus Initiative administers the College’s DeVries Lecture Series focused on the arts and has itself funded the installation of several sculptures on campus since 2012. For more information, visit www.kellogg.edu/art-on-campus.

Click here to view high-resolution photos of the sculpture, which may be downloaded for use by the media.