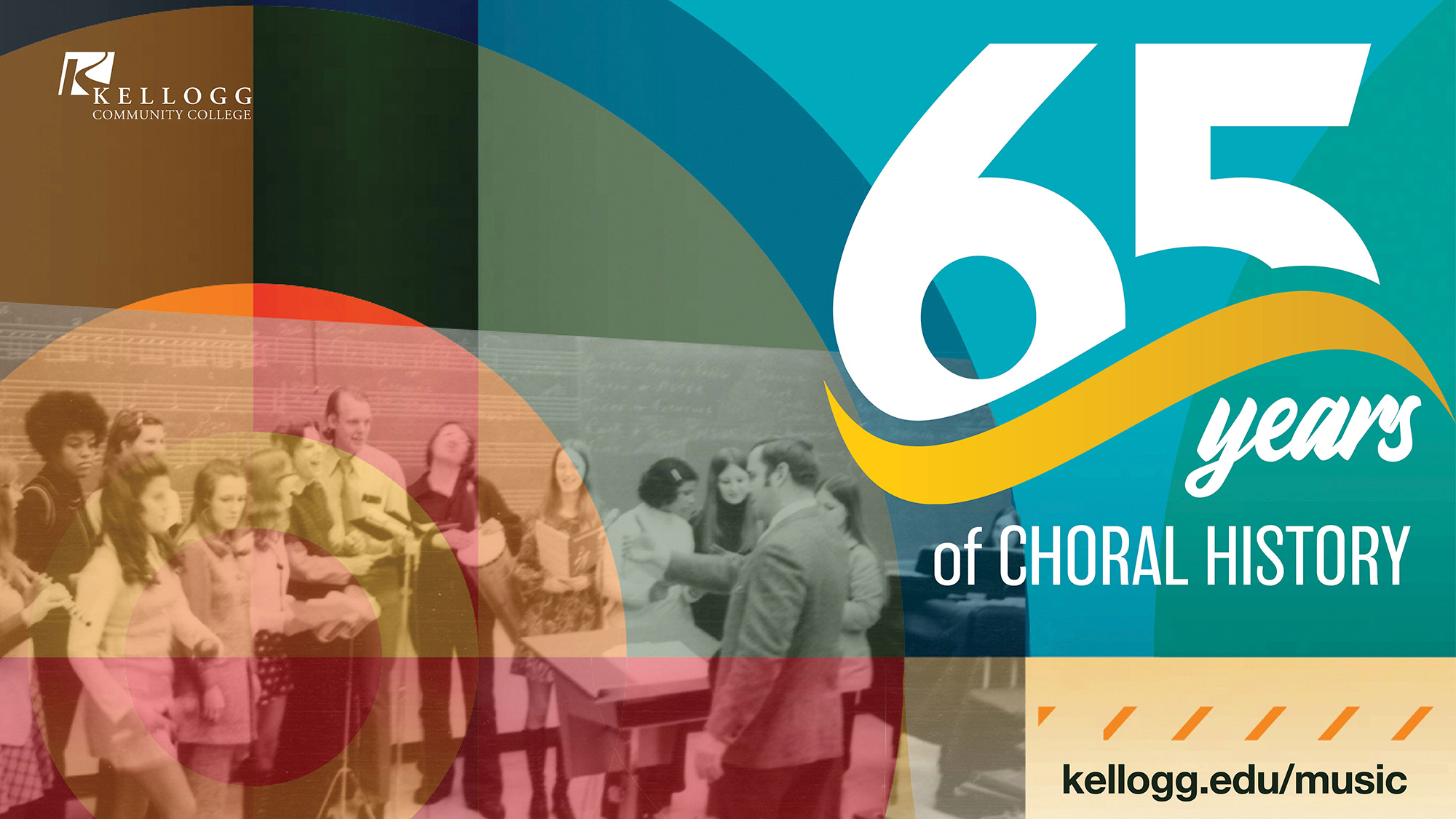 The year 2020 was a quieter one than most in Kellogg Community College’s storied 65-year history, with the silent halls perhaps nowhere more noticeable than the music wing of the Davidson Visual and Performing Arts Center.

The Davidson Center is home to two of the College’s three residential choirs – the Concentus Vocal Ensemble and the Kellogg Singers – as well as the College’s Opera Workshop Ensemble, Jazz Band and the KCC/Community Music School Concert Band. (The third KCC choir, the Branch County Community Chorus, is housed at St. Mark’s Episcopal Church in downtown Coldwater.)

On an average school day in the building, voices can be heard rising and falling from the choir room, piano keys tinkling through the muffled soundproofing of the practice rooms. But when the College closed to in-person learning in mid-March last year due to COVID-19, the music stopped.

Dr. Gerald Case-Blanchard, director of Vocal Arts at KCC and coordinator of the College’s music programming, worked tirelessly throughout the year to make sure it didn’t stop for long, leading virtual classes and lessons and showcasing past performances by faculty, students and guest artists on the program area’s online platforms to mitigate the absence of what would normally be a season filled with dozens of musical performances in the communities the College serves.

The choirs even released their first-ever professionally produced virtual choir performance in January, a video production that required more than a dozen KCC choir members to record their parts alone for later editing. Two similar productions are currently in the works and scheduled for release in the coming months.

Case-Blanchard said the project, and others like it, have been creative ways to keep students singing and expressing themselves at a challenging time when music is perhaps more needed than ever.

Case-Blanchard and company will bring that balm to the community again this spring, with a major online event titled “A Celebration of Performing Arts at KCC: A Virtual Gala” to be held on April 27. The event is a celebration of music and theatre programming at the College spanning six decades – 2021 marks the 65th anniversary of choral programming at KCC – and will double as a fundraiser for KCC performing arts initiatives.

A Legacy of Music

The history of choir at Kellogg Community College is in many ways a history of the College itself.

Additional highlights from KCC’s history include the founding of the College’s Opera Workshop and the Kellogg Singers’ first concert tour under the directorship of Robert Walker (1996-2001); the latter tour culminated with a performance at the prestigious Carnegie Hall in New York City in 1996. The following director, Deric Craig (2001-04) brought increased choir participation in local music festivals, concerts on and off campus and the founding of the Branch County Community Chorus in 2001, which is celebrating its own 20th anniversary this year.

Case-Blanchard, entering his 17th year of choral directing at KCC, is quick to acknowledge the contributions of such choral champions over the years, who “kept the tradition of singing beautiful choral music vibrant in the Battle Creek community and at the college” and who “laid the groundwork for our musical landscape and its vibrant choral community which still exists today.”

That community, according to Case-Blanchard’s estimate, includes more than 5,000 choral students whose voices have been lifted in the various halls and classrooms at Kellogg Community College since 1956. The audiences those voices spoke to number in the tens of thousands.

“As the current director of the choral program at KCC, I continue to reflect on the many milestone achievements throughout our past, while simultaneously celebrating what has been achieved in recent years,” Case-Blanchard said. “However, it is in knowing the love and dedication each of my predecessors held for the institution, their students and the power of choral music that makes me do my absolute best to continue and to preserve the legacy of these great musical powerhouses.”

Choral programming at KCC has continued to grow and to expand its repertoire since Case-Blanchard took the helm in 2004. A particular emphasis over the past decade has been on musical collaboration, and under the leadership of Case-Blanchard the choirs have established relationships with musical organizations throughout the state.

The choirs have collaborated in recent years with organizations including the Michigan Festival of Sacred Music in Kalamazoo, the Battle Creek Symphony Orchestra and the Haydn Festival Orchestra, and participate in a biannual performance of G.F. Handel’s “Messiah” with the Monroe Community Chorale and Symphony at the historic IHM Motherhouse Chapel in Monroe. The choirs have even opened for internationally renowned musical groups including Sweet Honey in the Rock and Take 6.

In the years since Case-Blanchard established a biannual touring program in 2007, the KCC Choral Union has performed nationally at major venues in Illinois, Indiana, Michigan, Minnesota, Massachusetts, New York, Ohio, Pennsylvania and Wisconsin, and performed international concert tours of Ireland and Italy in 2012 and 2014, respectively. Plans are in the works for concert tours of the southern U.S., Canada and for another trip to Europe.

Case-Blanchard said such touring initiatives benefit the individual participants on numerous levels, and “help to foster the growth of our program through intense shared artistic experiences.”

Today, in addition to the College’s residential choirs, KCC’s Arts and Communication Department offers a robust music program including an Associate of Arts degree with a music concentration and certificates in Music Enrichment and Sacred Music, the latter a particularly unique offering among community colleges in the state of Michigan. Additional music opportunities for students and community members offered through the College include individualized voice and instrument lessons, master classes, student recitals, an annual Opera Workshop and other music initiatives, including youth performance camps.

It’s a big expansion from the single choir formed when the College was just a fledgling institution operating out of the GAR Hall 65 years ago, and speaks to a proud tradition that isn’t lost on the choirs’ current director.

“KCC’s choral programming evolved from a music club into a more formal singing organization in the late 1950s because the founding members and their passionate leader, Pops Richards, found great joy through the choral tradition, a tradition which continues to be the cornerstone of the program today,” Case-Blanchard said. “The choirs at KCC continue to forge new paths as we look forward to the next 65 years of music-making experiences.”

A Celebration of Performing Arts

Individuals interested in learning more about KCC’s long tradition of choral excellence or in celebrating the choir (and the College’s) 65th anniversary with a focus on performing arts can join Case-Blanchard and others during the free “A Celebration of Performing Arts at KCC: A Virtual Gala” event online on April 27. The event will feature the talents of the KCC choirs, alumni, theatre cast members and faculty artists, as well as remarks from notable KCC theatre alumnus Lance Barber, who stars in the sitcom “Young Sheldon” on CBS.

Attendees can register for the event in advance or make a donation to support performing arts initiatives at KCC online at www.bit.ly/KCCGala21.

For more information about music programming and initiatives at KCC, visit www.kellogg.edu/music.