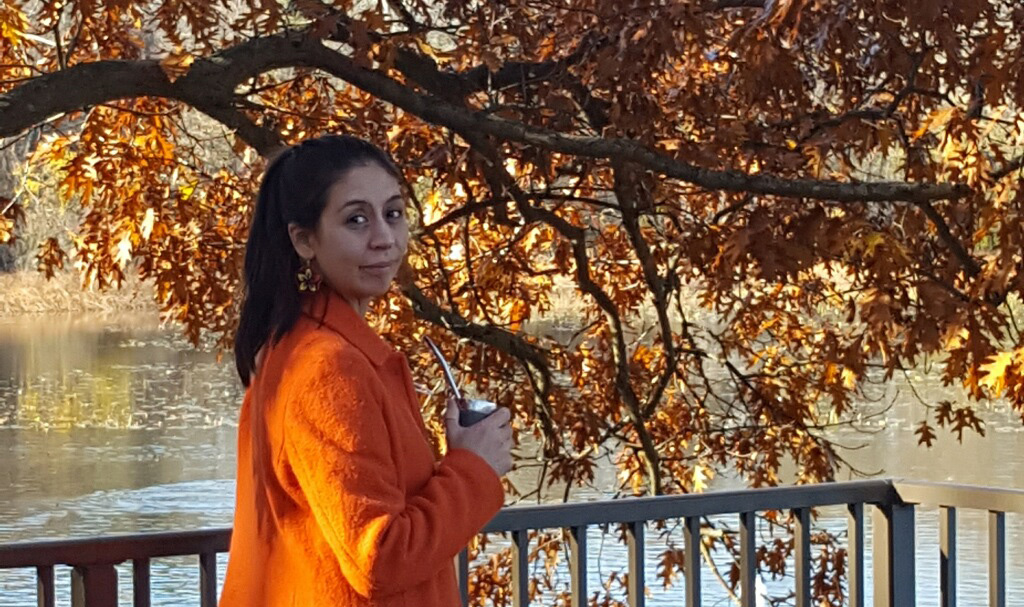 Tania Fleitas, 38, was born in Argentina and moved to the U.S. in 2017. A cultural agent and community interpreter and a classroom assistant at an area Montessori school, Fleitas also was the founder of Teatro Latinoamericano y Vecinal de Battle Creek, or the Latin American Theatre of Neighbors of Battle Creek, which was active from 2017 through 2019. We caught up with Fleitas by email to ask her about her cultural heritage and what Hispanic Heritage Month means to her.

KCC : Tell us a little bit about yourself. Where is your family from originally, and when did they come to the U.S.?

Tania Fleitas: I was born in Cordoba, Argentina. That’s the university town were my parents met. My mom was studying to become an English teacher, and my father, who was originally from Paraguay, was studying medicine. I grew up in Paraguay and moved back to Argentina when I was 23. I came to the U.S. for the first time in 2009. I visited again in 2013, and in 2017 I moved to the U.S with my husband, children, cat, dog and a suitcase of books.

KCC: What cultural traditions have carried on in your family over the years?

TF: Mate is a tradition and it is drink. Ilex paraguarensis. It’s a way of building a relationship with one’s origin, with friends to be, with oneself. Another one, it is related to mate, getting together, treasuring friends.

KCC: What do you think of when you think about Hispanic culture?

TF: It’s a term used here. Before coming to the U.S. I did not consider myself Hispanic. I prefer the term Latin American. Latin American includes Brazil, which neighbors the countries I lived in. The influence of Brazil in South American history, economy, culture is great. In my life Brazilian culture is most present through its music, and the lovely people from Brazil that I met in Michigan.

KCC: What aspect of being Hispanic are you most proud of?

TF: Latin Americans, I think we are resourceful, creative and resilient. Maybe the words cannot paint the images that come to my mind. I think we are resourceful because we can make it work in a MacGyver way, with what there is. Creative because we invent to live, the punches of economic crisis turned us to explore all our crafts, and resilient because of the dictatorships, cues, corporations that we have endured and the fight that the people continuously put to resist oppression.

KCC: What Hispanic role models have been most influential in your life, and why?

TF: I admire many Latin American artists in the different expressions, music, literature, painting, visual arts. In the field of social justice: Las Madres de Plaza de Mayo. And in the field of education, the Cossettinni sisters, Olga and Leticia. Their influence in my life was big, it was one of the reasons I moved to Capilla del Monte, so my child could experience education through the art. My child attended the Cooperativa de Enseñanza Olga Cossettini school for six years. The Cossettini fostered a community. The children were engaged and all the families were very involved, the school had its own currency. Creativity was top value of the school, to not hinder or relegate the children’s creativity. The celebrations of the seasons and the rondas of opening and closing of the school year were so heartwarming and joyful.

KCC: What does Hispanic Heritage Month mean to you?

TF: It means an intention to connect or reconnect with our heritage and meet with Latines from different regions and share, maybe remember the country we grew up in or that our parents grew up in and do something special to celebrate that. To put the assimilation on hold for a moment.

TF: Thank you for the opportunity to answer these questions. I would like to say to anyone interested in theatre, literature or films in Spanish to contact me at bapoeta@hotmail.com and let’s make something together. In 2017, I called for people interested in doing theatre in Spanish and that’s how the first play in Spanish came on stage months later.

National Hispanic Heritage Month is celebrated in the U.S. from Sept. 15 through Oct. 15 each year to celebrate Latino culture and the past and present contributions of individuals with Latino heritage. The month-long observance began as Hispanic Heritage Week in 1968 and was expanded to a full 30 days in 1988; the Sept. 15 start date is relevant as the anniversary of the independence of several Latin American countries.