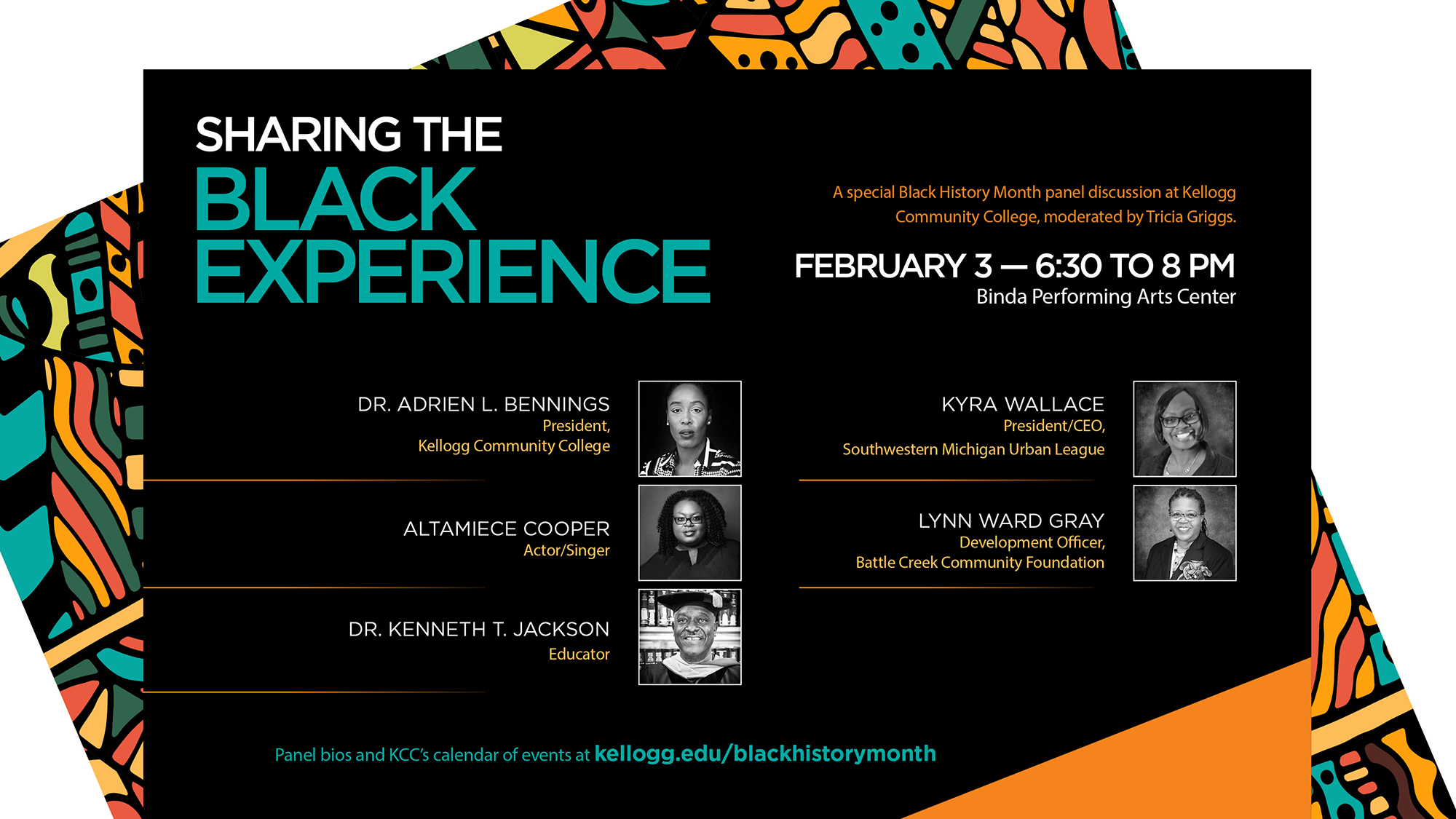 PLEASE NOTE: Due to inclement weather, this event has been postponed. Please stay tune for a future date to be determined.

The panel discussion, titled “Sharing the Black Experience,” will run from 6:30 to 8 p.m. Thursday, Feb. 3, at KCC’s Binda Performing Arts Center, on campus at 450 North Ave. in Battle Creek. The event is free and open to the public.

Moderator Griggs is currently working on a Master of Arts degree in Education Leadership-Higher Education/Student Affairs at Eastern Michigan University. Giving back to the youth is near and dear to her heart. Bios for each panelist follow.

Dr. Adrien L. Bennings currently leads Kellogg Community College as its sixth president. In January 2020, she became College’s first female president and its first black president to serve in this role. Bennings wears many hats, including co-chair of the Equity, Diversity and Inclusion (EDI) Committee. As a co-chair of the EDI Committee, Bennings leads the charge to champion awareness and appreciation of diversity and encourages dialogue and collaboration across all lines of difference within our communities.

Altamiece Cooper is a professional actor who grew up in Battle Creek. She is a Lakeview High School graduate and earned a degree in Music Theatre Performance from Western Michigan University. Shortly after leaving WMU she moved to New York City and landed a role in the 2006 national tour of the Broadway musical “Rent” as Mrs. Jefferson, which kickstarted her professional acting career. She has since performed on many different stages across the country and Canada and has been blessed to share those stages with many other talented stage and film actors. Cooper was recently seen as Nicely-Nicely Johnson in the Battle Creek Symphony Orchestra’s concert of “Guys and Dolls” and has also been a featured soloist with the Battle Creek Symphony Orchestra on multiple occasions over the years.

Cooper is extremely passionate about equity and inclusion in the arts for all people of color and especially Black and brown artists. She believes that the arts can change the world for the better.

Dr. Kenneth T. Jackson has a passion to help all children succeed. He is a 1971 graduate of Battle Creek Central High School and a 2011 BCCHS Hall of Fame inductee. Jackson is also a Vietnam Era veteran and was a member of the United States Marine Corps Presidential Honor Guard for President Richard Nixon in Washington D.C. A state champion boys basketball coach and two-time Coach of the Year, Jackson is also a retired school superintendent, a member of Omega Psi Phi Fraternity and a Third-Degree Mason. Being labeled the “troubled black kid,” statistics say he was not supposed to be where he is today.

Kyra Wallace is the President/CEO of the Southwestern Michigan Urban League. Wallace leads the nonprofit organization and its work to help African Americans and others in underserved communities achieve their highest true social parity, economic self- reliance, power and civil rights. Prior to becoming the president/CEO she served in a variety of positions within the organization after joining in 2006.

Throughout her more than 23 years in both the educational and nonprofit sectors, Wallace has participated in numerous sector efforts to enhance both. She currently serves as the vice president for Battle Creek Public Schools Board of Education; is an Executive Committee member for the Battle Creek Chapter of the NAACP; and is a member of the BC Vision Steering Committee, Population Health Alliance, Battle Creek Homeless Taskforce, Battle Creek Alumnae Chapter of Delta Sigma Theta, Inc.; and the Leadership Team at Glory 2 God Ministries. She was appointed by the governor to serve on the State Complete Count Committee. Wallace also has served on numerous other boards and committees through the years.

Wallace holds a bachelor’s and master’s degree from Western Michigan University in Education and is also a certified life coach and entrepreneur. Wallace is married with one daughter and a stepson.

Battle Creek native Lynn Ward Gray joined the Battle Creek Community Foundation in December 2007. As a development officer, Gray’s responsibilities focus on major and planned gifts at the Foundation. She also serves as staff liaison for the Battle Creek Public Schools Education Foundation Board of Directors and is a member of the Calhoun County Estate Planners Council. Gray also enjoys being the program director and host of the Foundation’s Horizons Radio program on WFPM-LP 99.5 FM in Battle Creek.

Gray was humbled and honored to serve five terms as a Battle Creek City Commissioner from November 2009 to November 2020, representing Ward 2 and serving as the city’s Vice Mayor from November 2014 to November 2015. She also ran a focused and inspiring campaign for mayor in 2020. Gray continues to serve her community as chapter president for the Battle Creek Alumnae Chapter of Delta Sigma Theta Sorority, Inc., a public service sorority founded in 1913 at Howard University in Washington, D.C.; as vice chair on the City of Battle Creek Planning Commission; and on a host of other boards, committees and commissions.

Gray resides in her hometown with her husband, Samuel A. Gray, a retired Navy chief petty officer and equally engaged community and veterans’ advocate.