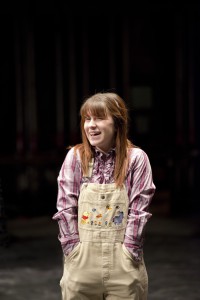 Below, Mohney, a 20-year-old Western Michigan University dual-enrollee from Battle Creek who’s finishing up her psychology minor requirements here at KCC, discusses her role in “Spelling Bee” in the second of our interviews with the cast, which we’re rolling out in the days leading up to opening night.

The KCC Daily: Tell us about your role. What kind of a person is she and in what ways is she different or similar to yourself?

Taylor Mohney: I play Olive Ostrovsky, a young and playful new contestant in the bee-sphere. She is very innocent and isn’t jaded to the competition like many of her fellow spellers. Because her parents are often too busy to be as attentive and loving as they should be, Olive finds comfort in her best friend, an over-sized dictionary. Throughout the process of this production, I’ve really found a lot of the younger version of myself in Olive. Don’t worry, my parents have always been extremely supportive of every crazy adventure I’ve attempted! But I was always the type of kid that wanted to be everyone’s friend, even if they jabbed at something silly like my name.

TM: Last semester, I played the role of Mollie Ralston in “The Mousetrap.” Both of these roles have been and are extremely emotionally challenging. However, as if the age difference wasn’t obvious enough, both of these characters approach conflict and their self-concept extremely different. The heart-breaking reality with Olive though is that because her parents aren’t around very much and she is forced to find comfort in inanimate objects, she is learning that she will have to face some very adult things, but is very confident that she can face it all.

TM: I’m super excited that this is my first musical performance in such a small cast where I can really dive into a character and really think about Olive in a much more detailed way. I’m also really excited for everyone to come see the show! It’s going to be so fun and high-energy with a few surprises along the way.

TM: With this role specifically, I’ve been influenced majorly by just my normal visits to my mom’s school, where she is a principal. It’s so fun to watch all of these elementary kids interact. I have to continue to remind myself of that time when we all genuinely wanted the best for each other, had skyscraper dreams, were anxious so chase them and were so innocent to the outside world. It has been a really eye-opening journey to view the world through a 10-year-old’s eyes being a decade older now. It’s inspiring, really.

TM: Audiences just need to come to this show ready to have a good time. I can’t wait for people to come see it and maybe even be just as challenged as the spellers. 🙂

Click here for more interviews with cast members from KCC Theater productions from posts on this blog. For more information about the Theater Program at Kellogg Community College, visit www.kellogg.edu/performart/theatre/index.html.