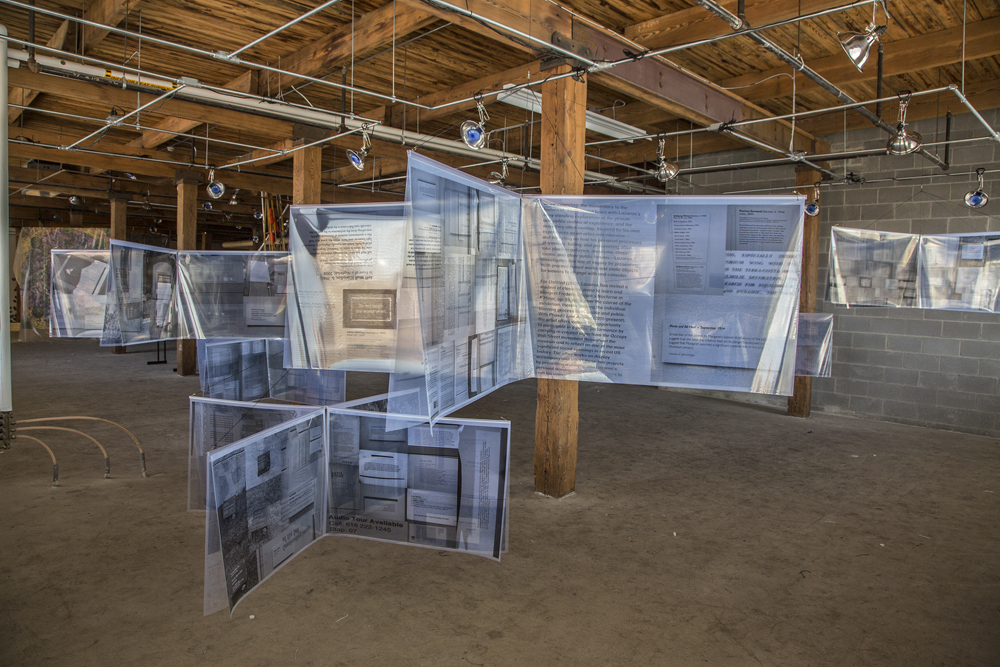 Kellogg Community College will be represented at the ArtPrize art competition in Grand Rapids this fall in the form of a collaborative sculptural work created through a class held at the college this summer.

The entry, titled “Didactic Revolvers” (pictured above in a photo by Ed Willams), was created by art instructor Vicki VanAmeyden and 10 students from her ART 295: Museum Field Study course. The course included travel to several regional art museums, and the group’s ArtPrize entry incorporates black and white photography from their travels as a visual record of their shared time of experiencing art in the Midwest this summer.

“We visit art museums to be entertained, transported and enlightened,” VanAmeyden said. “The anti-aesthetic, didactic information – gallery tags, artist and curatorial statements, interpretive text – helps us to locate meaning and links us to social and cultural context.”

The sculpture was funded by the KCC Foundation and is installed at the Grand Rapids campus of Western Michigan University, 200 Ionia Ave. SW. It consists of several semitransparent “revolvers” suspended from the ceiling on cables and covered in photographic collages that rotate organically as the viewer moves through the exhibit.

“The multilayered imagery in ‘Didactic Revolvers’ allows for alternative readings as the viewer moves, as the images shift and spin freely,” VanAmeyden said. “The semitransparent material traces the fog of history, memory, creativity and intuition – sensations that never return the same way twice.”

The ArtPrize competition begins Wednesday, Sept. 18, and runs through Sunday, Oct. 6, during which time participants compete for $560,000 in cash prizes determined through public vote. KCC’s project can be voted for online or with the ArtPrize app using the Vote Code is 55567; it can be viewed online at www.artprize.org/kcc-artcorps/2013/didactic-revolvers.