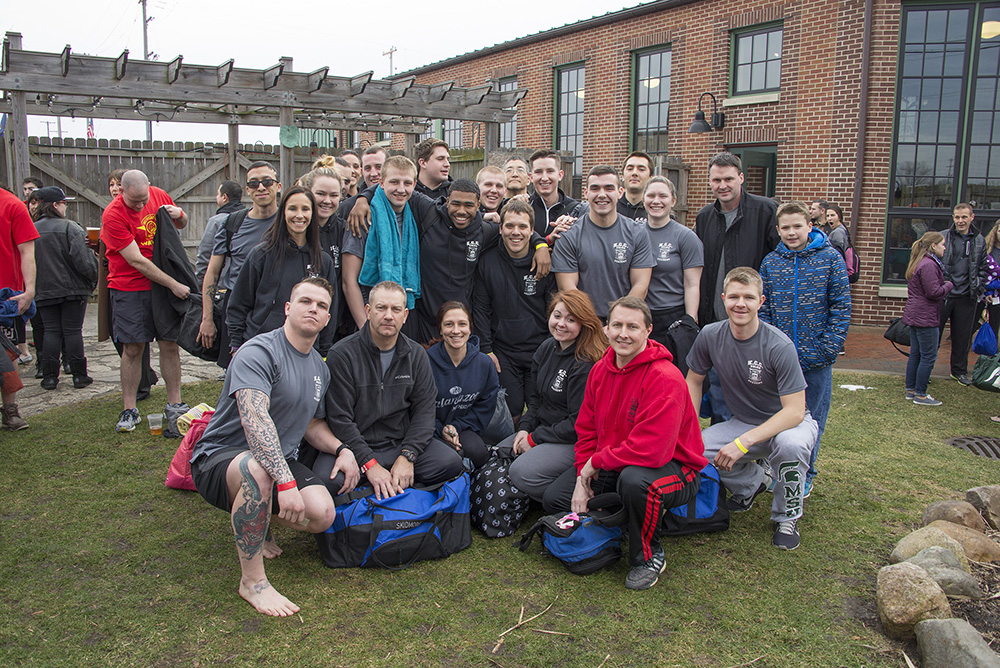 Kellogg Community College’s Police Academy raised $7,041 for Special Olympics Michigan as part of the 2017 Kalamazoo and Calhoun County Polar Plunge last weekend, the highest amount raised by any of the more than 50 teams participating in the Feb. 11 event.

More than 150 donors lifted the Police Academy to the No. 1 spot among teams, supporting the nearly two dozen KCC students and employees from the KCC Police Academy who took the plunge Saturday morning into the frigid waters of a pool stationed in the Beer Garden area of Bell’s Eccentric Café in downtown Kalamazoo.

Rob Miller, Criminal Justice Program director at KCC, said the College has been fielding a Polar Plunge team comprised mostly of Police Academy cadets for the past several years, but this is the most money the KCC team has ever raised for a single event.

“We began supporting the fundraiser because it was an offshoot of the Law Enforcement Torch Run, an event the Police Academy participates in each fall that also raises funds for and awareness of Special Olympics athletes,” Miller said. “The annual Polar Plunge is another great, fun way for our cadets to continue to give back to the community while building camaraderie at the same time.”

KCC Police Academy cadets Nicole Corstange, Jessica Cutshaw and Taylor Freelove were the top cadet fundraisers for the team. Corstange, of Galesburg, said the Torch Run this fall from KCC’s Battle Creek campus to Doris Klaussen Developmental Center was a big inspiration for her participation in the Polar Plunge, as it gave her a chance to meet members of the population served by Special Olympics and see how much the support means to them.

“I like to be able to meet the kids and see the athletes, and I just think that being able to be there as a class really helped us to see that we’re actually impacting individuals,” said Corstange, who raised $870 for the Polar Plunge. “A lot of family and friends helped out and were really supportive of the cause, and lot of them came out to watch us jump.”

Cutshaw, of Vicksburg, raised $675 and said as an athlete herself she likes to support other athletes. As for the experience of jumping in the Polar Plunge on Saturday, she said “the experience was something that you’re nervous to do it at first, but then you actually do it and it’s a great experience.”

Freelove, of Battle Creek, also said participating in the Polar Plunge was important for personal reasons. His mother has worked with special needs kids, he said, including as a school psychologist.

“It was a big deal to my family, so my family did a lot of donating,” said Freelove, who raised $450. “I also asked a lot of coworkers and colleagues, and everybody was pretty willing to give to the cause.”

All the cadets agreed they had a good – if cold – time participating in the event.

“It was so cold it takes your breath away,” Corstange said of the Polar Plunge water, laughing. “You look at the water and you don’t want to do it, but it’s for a good cause.”

Grace Maiullo, development and events coordinator for Special Olympics Michigan, said this year’s plunge was the largest Kalamazoo/Calhoun fundraiser they’ve had yet, raising a total of $44,421 with donations still trickling in.

“We are so thrilled with the support we’ve received from the community,” Maiullo said. “We truly cannot run the Special Olympics program without community involvement, so we are grateful to have had every single person who showed up in one way or another be a part of last weekend’s success.”

For more information about KCC’s Police Academy or other Criminal Justice programming at the College, visit www.kellogg.edu/criminal-justice.