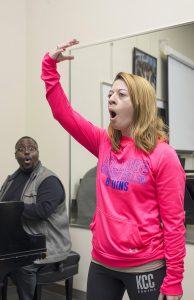 Music brings people together, but doing that can be a big job.

Kellogg Community College’s Sacred Music Certificate Program is one option for those who want to learn the skills and knowledge needed to do it, whether by leading church choirs, becoming music worship leaders or holding other leadership positions in the world of music.

The College is promoting the program as part of its upcoming Communitywide Hymn & Spiritual Sing-Along event, which will show what happens when those who love the music those choirs and worship groups produce get together. The free event will begin at 3 p.m. Sunday, Feb. 4, in the auditorium of KCC’s Davidson Visual and Performing Arts Center, on campus at 450 North Ave., Battle Creek.

Church budgets don’t always allow them to hire professional musicians to lead programs, Case-Blanchard said, “So they look within their own congregation. They kind of learn on the job, and what we can do is help fill those gaps.”

Carrie Zamora, of Battle Creek, graduated from KCC last year with two associate degrees and two certificates, including a certificate in Sacred Music. She’s now a member of the College’s Kellogg Singers and, during a recent rehearsal, talked about why she chose the program.

Now, Zamora said, she can read music, talk about the history of religious music and even conduct other musicians.

For that last part, she said, anyone new to the program needs to know to get a mirror.

“You have to learn to coordinate it into hand movements that other people are reading, so you have this visual language on paper that you’re conveying into a sign language with hands,” Zamora said. “Practice in front of a mirror. Conducting, singing and breathing exercises. You’re going to have to do all three of those, so a mirror is key.”

Those skills are what people can expect to learn in the program, and Case-Blanchard is hoping the Communitywide Sing-Along event gets people thinking about it. In fact, he said, that’s part of the reason for the concert, now in its third year.

“Every year, it seems like there’s more and more interest in it,” Case-Blanchard said of the show. “Then last year, I thought, I can connect the Sacred Music Program to this because that’s what we do. We look at hymns and we look at spirituals and we look at other sacred musical works as a part of the curriculum.”

The show is far from a study session, though. Case-Blanchard said it’s almost like a TV singing competition, as he and KCC Music Program faculty members Kathy Cary and Nancy Brown accept challenges from the audience on what to sing.

“Between Nancy and Kathy, I have tested them,” Case-Blanchard said. “They can play almost anything in any key. The audience gets excited and you’ll hear, ‘574! No, 121!’”

This year will include the chance to win door prizes; audience members can draw tickets, and if a hymn matching it is called out and performed, they win.

But there’s more to the show than that.

“I think it brings beauty into our lives, and calmness,” Case-Blanchard said. “I want to see it where it becomes ‘the it thing.’ The whole Battle Creek community comes together and sings.”