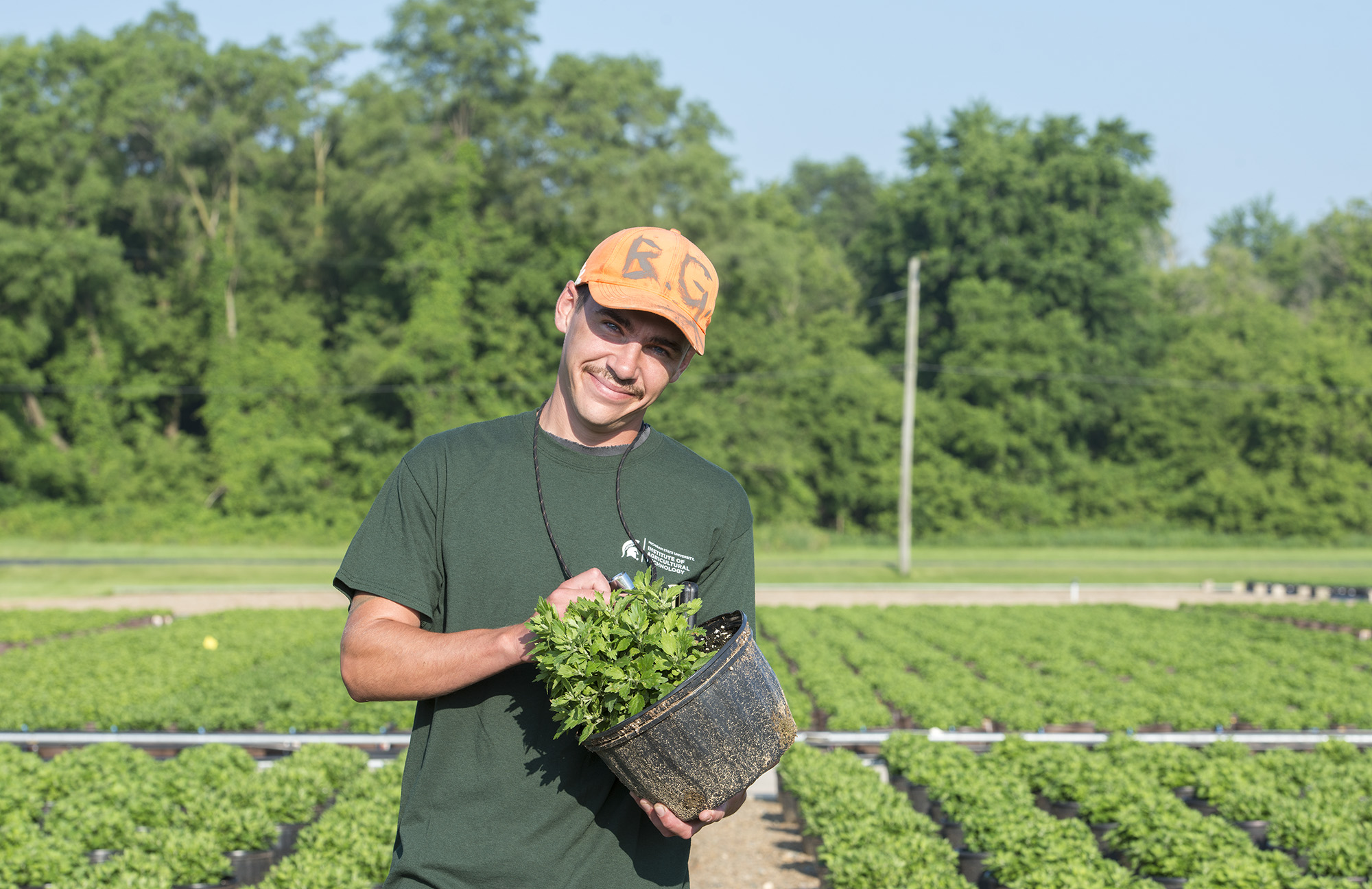 Ben Geibig’s interest in agriculture can be summed up in a single sentence: “I like to see things grow.”

Geibig, 28, is a student in Kellogg Community College’s Agricultural Operations Program. A partnership with Michigan State University that launched last fall, the program offers students the opportunity to earn an Associate in General Studies degree at KCC while simultaneously earning an Agricultural Operations Certificate through MSU, with all coursework completed entirely at KCC.

Additionally, each Agricultural Operations student must complete a summer internship before graduating. Geibig is in the internship portion of the program now, working in fields and greenhouses around the state with West Michigan IPM (integrated pest management) to help identify and monitor pests that could potentially harm plants.

“It’s been fantastic,” Geibig says of the program so far. “I’ve really liked all the classes.”

Geibig, of Delton, is a 2010 graduate of Delton-Kellogg High School. He started taking community college classes right out of high school, working at the same time. It was while working in at an assisted living facility that he was first introduced to working in agriculture, maintaining a vegetable garden where he helped grow tomatoes, Brussels sprouts, broccoli and other crops. He eventually heard about KCC’s new Agricultural Operations Program and signed up just a week or two before the first classes started.

This spring, Geibig finished up his Associate in General Studies degree at KCC, and he says he’s open to different opportunities once he finishes the Agricultural Operations Program.

“Long-term goals would probably be to own and operate my own organic operation in some capacity, probably primarily focused in beef cattle, grass-fed,” Geibig says.

He also likes what he’s doing now in his internship, working in pest management.

Mark Crossley, of Plainwell, owns West Michigan IPM, teaches entomology for the Agricultural Operations Program and supervises Geibig during his internship. Crossley says Geibig caught on really quick in his training in the field, which has real benefits over simply learning from a textbook in the classroom.

“I think it makes more sense,” Crossley says of the kind of hands-on learning offered via internships like Geibig’s. “In the classroom you kind of go through the chapters and the stuff we need to learn. In the field we learn as it comes to us.”

Geibig, who considers himself more of a visual learner, agrees.

“It’s definitely helped working in the field,” Geibig says. “When I’m seeing these things on a consistent basis it’s a lot easier for me. It’s real-world.”

The application deadline for students seeking to enroll in KCC’s Agricultural Operations Program this fall is Friday, Aug. 10. Applications are available at www.kellogg.edu/agriculture. Contact Program Coordinator Kaite Fraser at kfraser@msu.edu or 269-965-3931 ext. 2092 for more information.