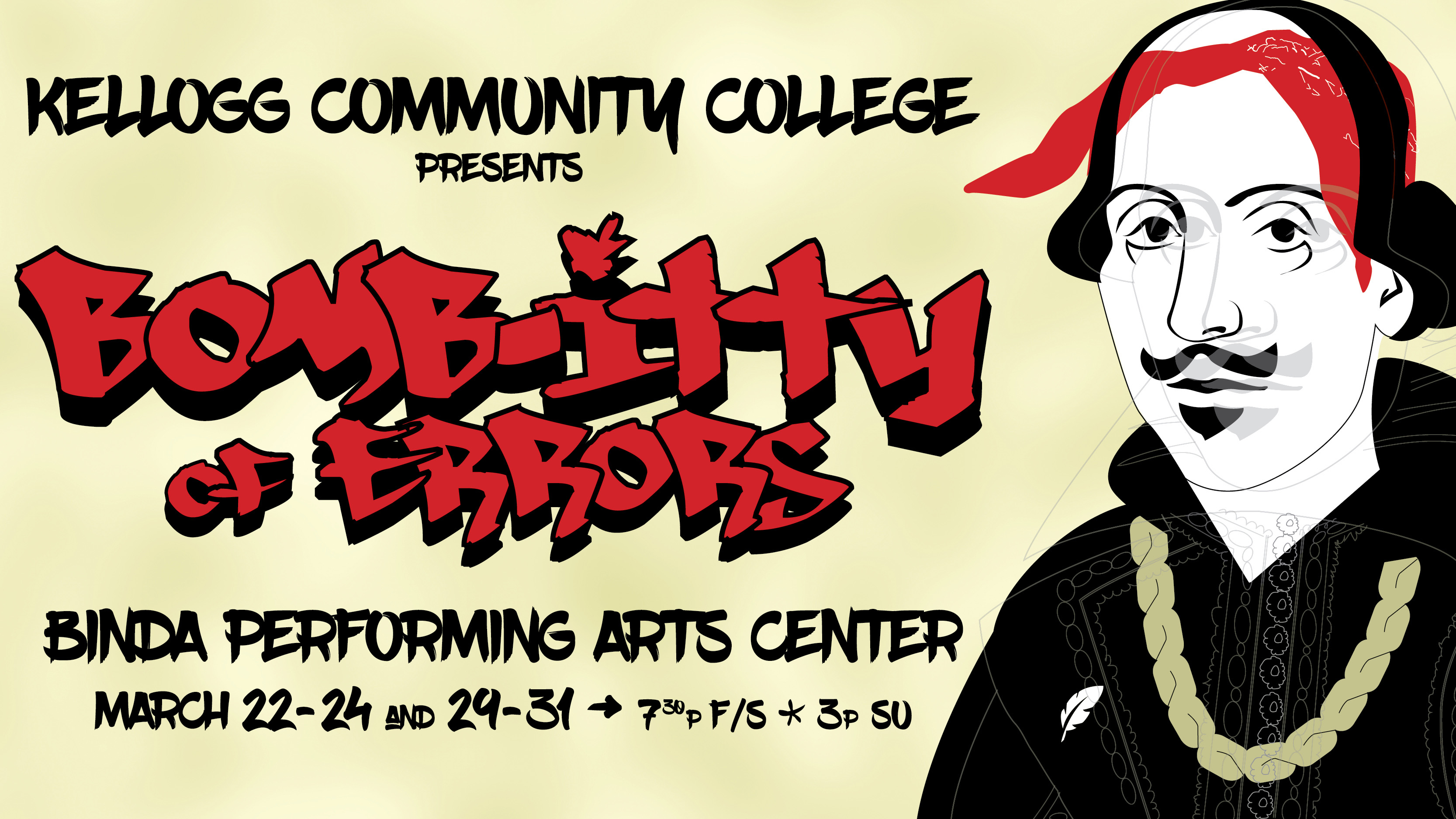 Kellogg Community College’s next musical opens at 7:30 p.m. Saturday, March 22, and mashes together a classic William Shakespeare play with hip-hop. It might be the way the bard would do it if he was alive today.

“The Bomb-itty of Errors,” showing at KCC’s Binda Performing Arts Center on campus at 450 North Ave., Battle Creek, also has performances at:

Tickets will be available at the door for $5 for KCC students, employees, seniors and military and $10 for the general public.

The musical is a modern take on Shakespeare’s “The Comedy of Errors.” Written by four friends who toured the show in places such as the annual Edinburgh Fringe Festival and even the Globe Theatre in London, “Bomb-itty” has an underground feel that director and KCC Theatre professor Brad Poer said harkens back to the way Shakespeare worked.

Hip-hop and Shakespeare also go well together, as both can deliver quick lines that might go past some listeners.

“As an audience member, you don’t catch the meaning of everything that’s said,” Poer said. “For folks who aren’t necessarily hip-hop nerds, it might be a little bit like watching Shakespeare.”

The PG-13 show – no violence or nudity, Poer said, just some dialogue on par with an old Beastie Boys song – is the classic “Comedy of Errors” plot of two sets of identical twins happening to converge in the same town.

Each set of twins was separated at birth. As adults, with one set of brothers working as servants for the other set of brothers, things get out of hand and mistaken identities begin to pile up.

Casting a show like this might seem difficult, but the production leans into it by calling attention to the fact that the twins don’t look alike.

“It’s explained and we kind of beat the audience over the head with it during the show,” Poer said. “You just have to kind of take our word for it.”

The director was able to draw on some KCC Theatre regulars, along with a few who are brand new to the stage. The cast had to prepare for the show somewhat differently than for a traditional musical.

“It takes a lot of practice,” Poer said. “There is no sheet music for this show at all. It’s literally a matter of looking at the script and listening to the cast recording of the original folks who did it.”

For more information about KCC’s Theatre Program, visit www.kellogg.edu/theatre or check out the department’s Facebook page at www.facebook.com/KCCTheatre.