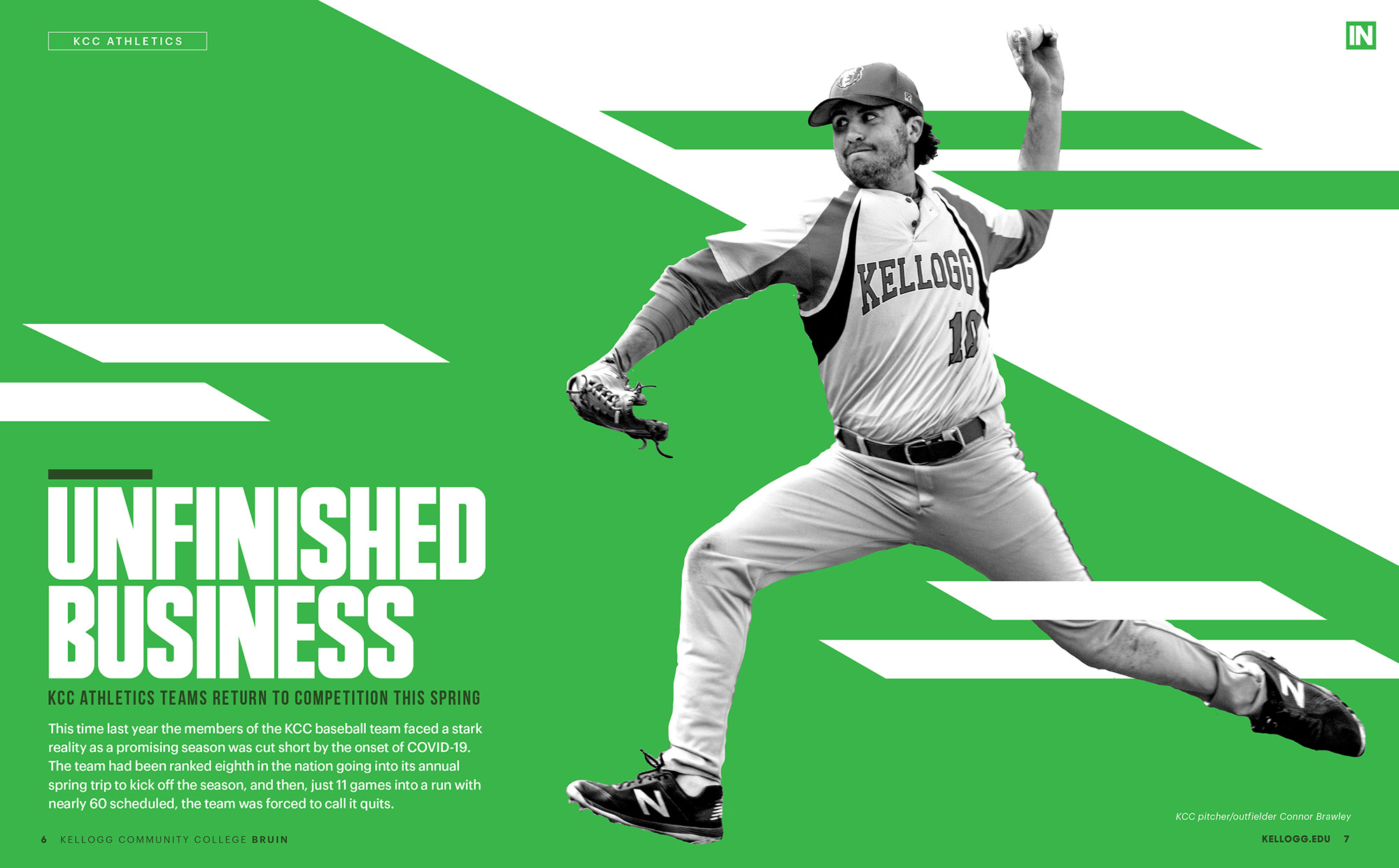 This time last year the members of the KCC baseball team faced a stark reality as a promising season was cut short by the onset of COVID-19. The team had been ranked eighth in the nation going into its annual spring trip to kick off the season, and now, just 11 games into a run with nearly 60 scheduled, the team was forced to call it quits.

JR Ratliff, an accounting student at KCC and then a first-year baseball player for the Bruins, said the cancellation of the 2020 season stung the team.

“No athlete ever wants to hear that after all the hours they train and prepare for the season,” Ratliff said. “We were in a place where we didn’t know who was coming back, or what the future held for not just us, but for all sports. That can be a scary feeling not knowing when you will be back out on the field.”

Ratliff and his teammates kept in shape through the shutdown via recommended workouts sent from Head Baseball Coach Eric Laskovy via an app, which helped them keep in touch and hold each other accountable. They were also motivated by a challenge Laskovy leveled for the coming season.

“During quarantine, Coach Laskovy told us we would have to complete a 2-mile in under 14 minutes and 30 seconds,” Ratliff said. “Running every day getting ready for that 2-mile and doing some at-home workouts before the gyms opened back up were key in feeling like I was in good shape heading into this season.”

The baseball team, along with athletes from KCC’s other sports – basketball, bowling, cross country, soccer and volleyball – were allowed to practice from late summer through mid-November under certain restrictions, though competitions for all fall sports except cross country were postponed till the new year.

Practices resumed again in January, but the College announced in February that due to ongoing concerns and restrictions related to COVID-19, the Bruins would be opting out of formal basketball and volleyball competition for the remainder of the 2020-21 academic year.

KCC Athletic Director Tom Shaw said despite such disappointment, the College’s athletes “have been and are a resilient bunch.”

“Community college athletes are built that way,” Shaw said. “They didn’t get that big full-ride scholarship to a four-year school out of high school and they are used to battling to be noticed and to get another look from the four-year coaches. This is just another speed bump for them to battle through as they keep working toward their goals.”

That’s not to say the past year hasn’t had its share of highlights for KCC athletics. In June, Shaw was honored as the Michigan Community College Athletic Association’s 2020 Athletic Director of the Year, making him the first-ever three-time recipient of the award. June also saw the hiring of a new head women’s basketball coach, Kayla Whitmyer, of Bellevue.

This fall, the women’s cross country team brought home its second regional championship in three years, and placed second in the nation at the National Junior College Athletic Association National Championship in November. Two Bruin runners – sophomore Emma Berning and freshman Hannah Wilkinson, with second- and fourth-place finishes, respectively – earned NJCAA First Team All-American honors, as did freshman Brian Frazee, who finished third in the men’s race. And even with the last half of the year shadowed by COVID-19, 43 individual student athletes and four KCC athletics teams received academic awards for excellence in the classroom from the MCCAA and the NJCAA.

Sixteen of those academic awards were for KCC baseball players, who with a cumulative team GPA of 3.18 joined the women’s basketball, soccer and volleyball teams on the list of All-Academic Teams for both the MCCAA and NJCAA.

Laskovy said his players “have been a joy to coach” and have handled the past year’s obstacles as well as can be expected.

“We told them the great Hall of Famer Ted Williams had a baseball season interrupted to go fight in a war,” Laskovy said, “so we felt it was important to keep things in perspective.”

The 2020 season didn’t count against the players’ limited eligibility, and a handful of third-year students who missed their chance to be recruited last spring are returning for another shot. Others, Ratliff among them, are coming back as freshmen even though they’re now sophomores academically.

“They know we have unfinished business as a program and are doing the things necessary every day to deserve to win,” Laskovy said. “This team is ready to go out and defend our Regional Championship and get great opportunities at four-year institutions to continue their careers as student athletes.”

It’s not just the baseball team that has plans to take care of business this spring. The College’s new men’s and women’s bowling teams participated in their first-ever competition Feb. 12, with the women placing second and the men placing third at the Ancilla College Invitational in Indiana. KCC sophomore Kelsey Kipp was the standout bowler of the event, bowling game and series highs. The regular bowling season runs through March.

The women’s soccer team, pushing its fall season to this spring, will finally take the field beginning in April, with games scheduled through May. And the basketball and volleyball teams, though opting out of formal season play, are still able to practice, with a scheduled “scrimmage/alternative” season of five competitions each running April 12 through May 10.

All competitions will be spectator-free through the semester, with mask and social distancing requirements for all athletes.

Shaw said the latter alternative season gives players otherwise unable to play a chance to still get recruited by four-year schools. Additionally, athletics provides an important mental health outlet for the students that can’t be ignored during the pandemic, Shaw said, and they can keep students in school who might otherwise drop out.

“Athletics help motivate our athletes to keep grinding towards their goals and keep them going to class online so they can play their sport,” Shaw said. “I would be afraid if we just threw our hands up and said this year is a wash, a lot of student athletes would have dropped out of college and not make any academic progress. Some of them would have never returned to college after a year off. Athletics might be the carrot for some of our athletes to stay in school, and that’s important and that is alright.”

As for KCC baseball, the team opened its season on Feb. 28 with the first of a series of away games. For Laskovy, who’s entering his 22nd year of tenure with the KCC baseball team and his 15th year as head coach, it could be a banner year as he closes in on 500 wins with the Bruins.

It’s also a chance to honor the late Russ Bortell, who helped build the baseball team to its current powerhouse status. Bortell, who worked at KCC for more than 30 years, died this past January.

“Our success is due to support from the College, amazing assistant coaches and great student athletes,” Lasokvy said. “Everyone associated with this program is humbly working to honor the late Russ Bortell in continuing the great tradition that he built.”

For Ratliff and the rest of the baseball team, it’s a chance to finally hit the field and show the world what they can do.

“We’ve got a great group of guys and we are all pretty close. I’m really looking forward to making some memories with the guys and attacking each day,” Ratliff said. “If we can just go out there, relax and play loose, we’ll be just fine and have a whole lot of fun playing the game we love.”