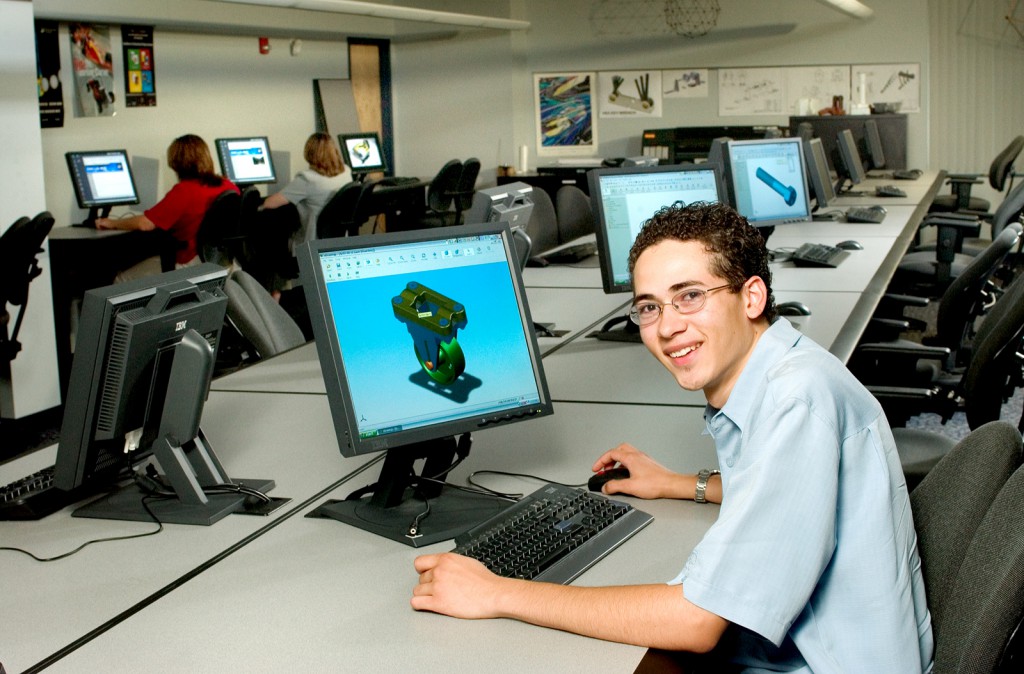 Editor’s note: The following article was first published in Kellogg Community College’s Summer 2012 edition of CareerFocus magazine with the headline, “A thousand words: CADD graduates use pictures to build the world.”

Ask Douglas Mann why Computer-Aided Drafting and Design is important and he’ll have a ready answer.

“Look around this room,” he said in a recent interview. “Everything in this room was drafted: the light fixtures, the computer monitors, the desks and chairs, the building itself. Everything in here, somebody had to draw so that somebody else could make it.”

For Mann, a Computer-Aided Drafting and Design Technology instructor at Kellogg Community College, it’s simple: As long as people are making things, there has to be somebody who draws those things to be made, and those people are usually CADD graduates.

“They say a picture’s worth a thousand words, and that’s what it’s all about in here,” Mann said. “We draw the pictures that speak the thousand words.”

The two-year CADD Program at KCC offers an occupational degree designed to enable graduates to enter the workforce with an in-demand, marketable skill offering immediate value to employers. About half of the graduates continue their education in pursuit of advanced degrees in engineering. Many other students who take CADD courses are preparing to transfer into architecture or other related programs.

Michael Gagnon, director of the Business and Information Technology Department at KCC, said companies from all industries – everything from plastic and injection molding to tool and die making to manufacturing – are interested in hiring CADD graduates, who upon graduation from the college will have a firm grasp on the latest editions of the two major industry software platforms, AutoCAD (used for two-dimensional drawing) and SolidWorks (used for three-dimensional drawing).

“We do a real good job in taking students to the point of having a skill base where they’re ready to make a contribution to the employers upon their graduation from here,” Gagnon said. “Our employers in the area are real pleased with the skills that we’re producing with the students in regard to the AutoCAD and SolidWorks software.”

The CADD Program at KCC also offers students the opportunity to work with a rapid prototype machine, which allows students to create physical three-dimensional models made of plastic.

“We are on the cutting edge of teaching two- and three-dimensional drafting,” Mann said, adding that the college was one of the first schools in the state to abandon manual drafting to move exclusively into CADD.

“We are doing 2D and 3D drawing and 3D printing when some community colleges around this state are still debating getting away from the manual drawing boards,” he said. “We realize where the future is and we are on that path.”

Assisting the college in moving forward is the Computer-Aided Drafting Advisory Committee, a group of community partners from area companies that helps drive the CADD Program forward.

The program’s adoption of SolidWorks, for instance, was a direct result of community partners asking the college to implement the software because its mastery was a skill they would be looking for in future employees.

But regardless of whether CADD students choose to move on to a four-year school or into the workforce, Mann said the jobs are there.

“I know right now there are jobs waiting and wanting because there aren’t enough graduates to fill those jobs,” he said, adding that he recently received two job postings from the city of Kalamazoo for full-time drafters. “Our CADD students get jobs, and they’re good jobs.”

Gagnon said the outlook is only getting better. And beyond applying themselves in a career they love, CADD graduates benefit from knowing they provide a necessary service to their communities.

“The CADD program provides a solid foundation of technical skills that are necessary in the development and manufacturing process,” Gagnon said. “We’re always going to need people to design and put together the prints to successfully make quality products.”