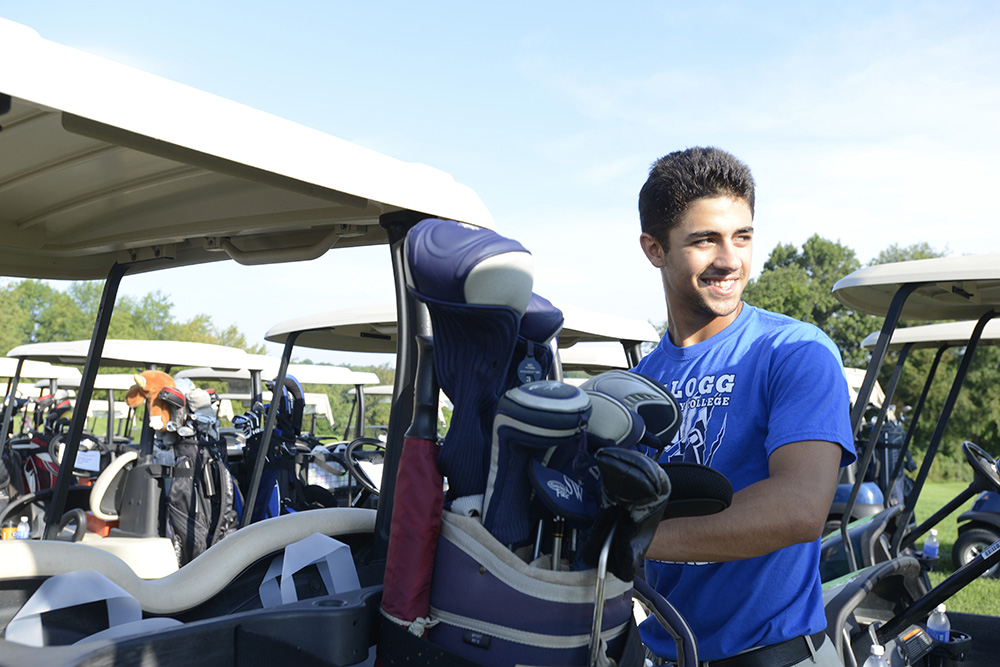 The annual event – held Sept. 5 at Binder Park Golf Course in Battle Creek – is the largest fundraising event of the year for the Foundation and has raised nearly $800,000 over the past 17 years.

Eric Laskovy, head baseball coach at KCC, split 30 of his players into two groups to assist at the event. The first group arrived as early as 6:45 a.m. to help with setup; the second group arrived at 8:15 a.m. to carry participants’ golf bags from their vehicles in the parking lot to the golf carts on the course until the event kicked off at 10 a.m.

“Volunteerism is a valued part of our student-athletes’ experience at Kellogg Community College,” Laskovy said. “We were grateful to be included in a terrific event that has helped benefit many KCC students over the years.”

Amy Julien, head women’s volleyball coach at the College, sent 10 of her players to assist at the event. The women handed out raffle prizes to winners following the event and posed for pictures with sponsor signs to be included in thank-you cards from the KCC Foundation.

Julien said it was important to the team to be represented at the event.

“It’s a great way to show our players how much we are supported through our the community,” she said.

The previous fundraising record for the event was $92,944, raised in 2012. Last year the event raised approximately $90,000 and paid for about 25 student scholarships.

Teresa Durham, executive director of the KCC Foundation, said the student-athletes are valuable contributors to the success of the Bruin Open each year.

“It is truly empowering when KCC students engage in the Bruin Scholarship Open,” Durham said. “Our students are the first to greet the event participants, allowing our sponsors and players to visibly see the impact of their support. Knowing that the funds raised allow students to have opportunities to achieve their educational goals is both inspiring and rewarding.”

Nearly 60 teams participated and 120 sponsors were represented in the Bruin Open this year, which included an 18-hole scramble, prize raffle, 50-50 raffle, text giving/drawing, special hole contests, lunch and dinner. In addition to the student-athlete volunteers, the event was coordinated by more than 50 members of KCC’s staff.